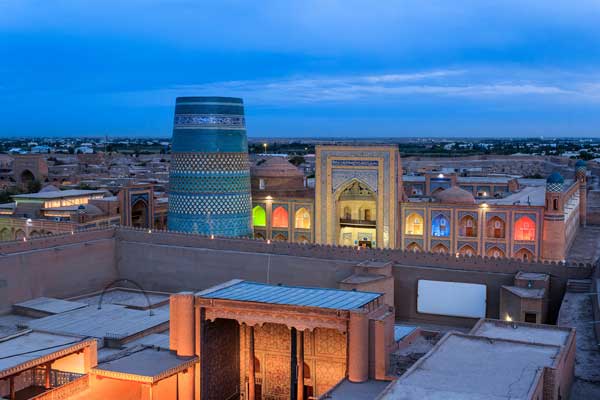 In Khiva, where Persians and Russians were once sold as slaves, the Silk Road met the information superhighway. As we stood beneath the 30ft-high mud walls of the city’s fort, the ultimate in sandcastles, our guide pointed to the statue of the man on the plinth outside: turbanned, furrow-browed, chin-stroking. He was the Muslim mathematician Muhammad al-Khwarizmi (who lived from about AD 780 to 850). From the latinisation of “al-jabr”, part of the title of his greatest work, we got the word “algebra”. From the latinisation of his name we got “algorithm”. The latter, of course, is central to the search engine, that program with which we established while still at home that the currency of Uzbekistan is the som, and that in September Khiva has a daytime high of 28C.
With $20 buying 48,000, we had pockets bulging with soms, and we could feel the midday sun beating on our shoulders. At a time when China had been talking of establishing a new Silk Road through Central Asia, a fast inland route for its exports to Europe, we had come to Uzbekistan to gaze on the glorious remnants of the old one; on some of the finest Islamic architecture in the world.

Our caravan was the Orient Silk Road Express, a diesel-hauled Russian train chartered by a German company, Lernidee, which sells compartments on it through tour operators in countries including Britain. Our route took us in a grand loop from the capital, Tashkent, to Bukhara, Khiva and Samarkand, then back to Tashkent, with four nights spent on the train and four in hotels (that was the ration in my case; itineraries do vary).

“I’ve wanted to be here for years, and I can’t believe I’m here.” Visitor on the Orient Silk Road Express
Our group, numbering 18, was one of three on board, the others being French and German. Ours, comprised largely of retired teachers, was “the British group”, or at least the English-speaking one, including as it did the Pakistani area manager in Dubai of the multinational Caterpillar, travelling with his wife. It was also “the red group”, named for the flag with which our guide would lead us on sightseeing outings. “After many years,” he joked, “ the Red Flag is being waved again in Uzbekistan.”

• The world’s best rail journeys
It was in Tashkent that we had our first encounter with Tamerlane (1336-1405), “Conqueror of the World”, or at least with his image, which since the collapse of the Soviet Union and Uzbek independence in 1991 has been supplanting Marx, Lenin and Stalin on plinths all over Uzbekistan and riding across the back of the 500-som note. Here was a man whose empire stretched from the Mediterranean to the frontiers of China, but whose legacy is problematic: sublime buildings on the one hand, pyramids of cemented skulls on the other.
Less sublime are many buildings of the capital, 90 per cent of them erected since an earthquake in 1966. Volunteers from the Soviet Union who helped in rebuilding have left their mark. They have left broad avenues, too, lined with plane trees wearing white socks. We would see those socks on every tree in the country, painted at the base of the trunk for protection against insects and sun.

• 15 reasons why the Trans-Siberian is the world’s greatest rail journey
Ours was essentially an urban odyssey, a round of “the five Ms”: mosque, madrassa, minaret, mausoleum and monument; there was music, too, from an orchestra at the Tashkent State Conservatory playing Uzbek folk instruments. In Bukhara, in the audience hall of the emir Nasrullah Khan, our guide conjured vividly for us one notorious episode of the Great Game, when the emir had received, successively, the British soldiers Stoddart and Connolly before jailing them and then (in 1842) beheading them. In Khiva, we visited both the place where captives were sold into slavery and a suzanni (embroidery) centre where women are lifted out of poverty. In Samarkand, we saw two cities of the dead: the richly-tiled tombs of Tamerlane’s family and favourites and, beyond them, the modern cemetery, filled, in the Russian style, with white stones bearing black images of the deceased. “Grim-looking faces; they must be glad to be gone,” as one of our party put it.
In all these cities, it was striking that Islamic institutions seemed essentially to be serving the tourist trade, the madrassas (religious schools) little more than souvenir markets, though our guide told us we would find the mosques busier on Fridays. He had been entertaining as well as educational about Uzbekistan’s history, so we didn’t want to cause him difficulties by pressing him on contemporary politics. Any visitor who Googles “Uzbkekistan”, however, will find that the call to prayer was banned following bomb attacks in Tashkent in 1999 blamed on the Islamic Movement of Uzbekistan, and that the charity Human Rights Watch says there is persecution of both Muslims and Christians who practise their religion outside strict state controls.

We had one outing into the countryside, where 60 per cent of Uzbekistan’s population lives, to visit the village of Langar Ota, near the border with Tajikistan. Fields of cotton (“the white gold” of Uzbekistan, which is picked partly by forced labour) gave way to biscuit-coloured hills nibbled by goats. Houses, built with bricks of mud, straw and water, had fast-growing poplars (for timber) outside their perimeter walls, fruit trees within.
We were welcomed by Mashkura, an 80-year-old matriarch who has 12 children, 32 grandchildren and 47 great-grandchildren. Though marriages in rural areas are often arranged, she said hers had been for love, which won her a cheer, as did her assertion that the secret of a long and happy life was to “look on the bright side”.
A couple of younger family members played the part of bride and groom in a simulation of a traditional wedding. As they circulated among their “guests”, the bride alternately bowing and rising while holding out her veil with both hands, an elder walked ahead, burning incense on a platter to ward off the evil eye.
We saw, too, the richly brocaded crib in which a baby is shown off 14 days after arrival – “a system that was used before the Pampers”, as our guide put it. To keep the bedding dry, a tube is attached to the baby’s genitals and fed to a pot beneath the crib. There being no new-born available, a boy about a year old was strapped into the crib and then rocked by gold-toothed grannies. His response needed no translating: “Let me out of here!” We were happier with our own quarters, though on the train many of our group complained both that cabins were too warm and that water pressure wasn’t strong enough for a decent shower. Our doleful-faced train captain, Mr Ivanov, tried his best to oblige. At Shakrisabz (between Tashkent and Bukhara), as we enjoyed shish kebabs and salad at dinner tables set out on our private platform, he had a lorry sent “from the military fire department” to top up the train’s tanks.
Our group was too big for the boutique hotels that are refreshing hospitality in Uzbekistan. The properties we stayed at were comfortable but suffered a little from a post-Soviet hangover. In one, the shower fitting broke off in my hand; in another, I could find no information at all in my room about hotel services. There was nothing Soviet, though, about our reception, in hotels and from Uzbeks as a whole: small children waved at our train and coach; teenagers went out of their way to offer directions.

The properties we stayed at were comfortable but suffered a little from a post-Soviet hangover. In one, the shower fitting broke off in my hand; in another, I could find no information at all in my room about hotel services.
Food was as hearty as the welcome was warm. Though few of our party developed a taste for plov (an oily stew of rice, vegetables and meat), most enjoyed the soups and the Uzbeks’ creative ways with aubergine.
For many, Samarkand, that most resonant name among Silk Road stops, was the highlight of our trip. As we sat gaping at the three medieval madrassas of the colossal Registan Square, with their shining restored tilework and still-tipsy towers, Margy, one of our party, said: “I’ve wanted to be here for years, and I can’t believe I’m here.” We returned as darkness fell for a sound-and-light show. As the commentary ended in German and switched to English, we were ushered in to front-row seats, to watch the lights play across the ensemble, one colour on the facades, a contrasting one on the arches, niches and domes. The sound was distorted, but the verses between the stirring music seemed to owe more to Hallmark than to Omar Khayaam: “I swear by all the stars above that science has always been my love… Now it’s time to part, so take with you my message of friendship from the heart.”
I preferred the night sky we had seen from the train – free of light pollution and mad with stars. In Samarkand, we bumped into a man who had had a closer look at it. We had been marvelling at the remains of the observatory built by Tamerlane’s grandson, Ulugh Beg, who as early as the 1400s hypothesised that the stellar year lasted 365 days, 10 minutes and eight seconds – only about a minute longer than the figure given by modern electronic calculations.
As we left, there was a kerfuffle by the entrance, where a man with jet-black hair and an equally jet-black unibrow was signing a book, while being filmed by a sharp-elbowed cameraman. The book-signer, it turned out, was Saliszan Sharipov, a Kyrgyzstani cosmonaut of Uzbek ancestry, who has spent in all more than 200 days in space. Several of our party grabbed their chance to squeeze in and have their photograph taken beside him. As one put it, “How often do you get the chance to see the Silk Road and meet an astronaut?”
Essentials
Regent Holidays (020 7666 1244; regent-holidays.co.uk ) is offering an 10-day “Treasures of Uzbekistan by Private Train” trip twice in 2016: departing on May 12 and on September 24. The price starts at £1,390 per person, based on two sharing and including all accommodation on a full-board basis on the train and in hotels, all transfers, all sightseeing and excursions and the services of English-speaking guides throughout. The price does not include international flights, which the company can organise on request.

This article was written by Michael Kerr from The Daily Telegraph and was legally licensed through the NewsCred publisher network.